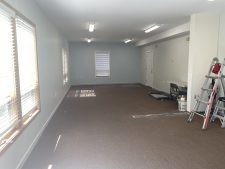 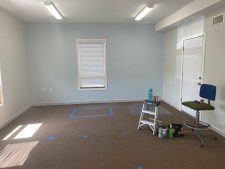 Things are moving forward at the studio! The walls are painted, and the half wall is gone. Thanks to my sister Meg for giving me some great organizing advice and helping me visualize the desks and other furniture (marked with tape on the floor).  And thanks to my buddy Forest, for keeping me company while I paint! Still need to finish the trim and paint the bathrooms. Stay tuned for more updates 🙂

So, this is where we start. It’s a lovely space with a new ceiling and overhead lights. I imagine 6 student desks will reasonably fit in the 15′ x 40′ space, with my desks and machines, and room to move around.

That half-wall in the middle of the room is disrupting the flow, so it will have to go. But the place is full of potential! 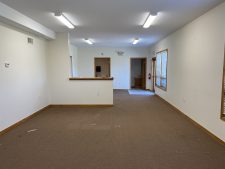 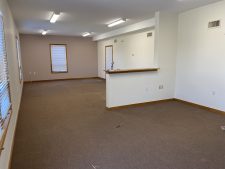 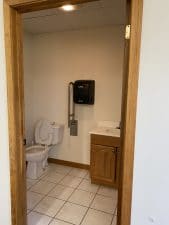 For years I have traveled to quilt guilds, fabric shops, and art centers to teach classes. As grateful as I am for the opportunity to connect with other fiber artists, I’ve had the dream of someday opening my own teaching studio. It looks like the stars have aligned and the time is now!
I have leased a commercial location in Oxford, CT. In the coming weeks and months, we (including generous family and friends) will transform a former office space into a functional and welcoming fiber art studio and classroom. By late summer, I will be offering workshops and activities such as: 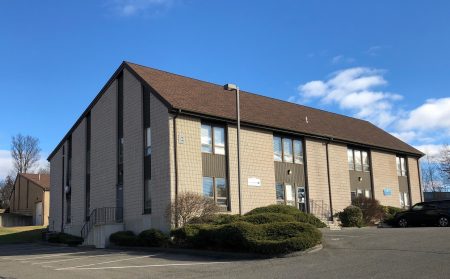 * Start to finish quilt projects
* Free-motion quilting workshops
* Fabric collage workshops
* Unstructured maker space
* Studio Away from Home
I know it’s been a strange couple of years, with many of us working in isolation. This will be an opportunity to meet in person again, collaborate with fellow artists, and work on projects together.
Regarding pandemic policies: I will be following all Connecticut and CDC guidelines for everyone’s health and safety. Class size will be between 3 and 8 students at a time.
If you or a friend have an interest in any of these classes or workshops, please let me know and I will keep you informed as the plan develops. Contact me at thefiberartstudio@gmail.com 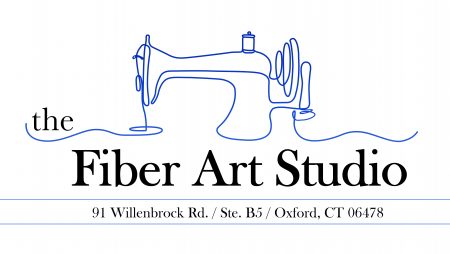 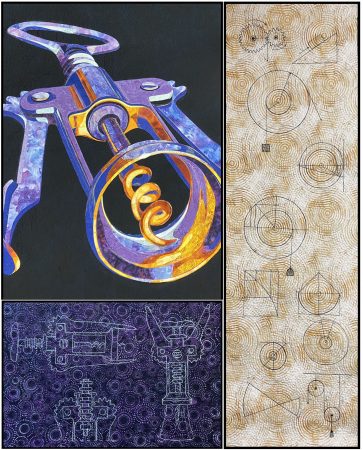 So here we are, at the 3rd installment in my MACHINE series. “Corkscrew” is made up of 3 separate quilts with the total dimensions 60×48 in. I love this invention, and what it represents – something is about to be opened with the hope that its time in isolation has succeeded in making something delicious.

The largest of the 3 quilts (40x30in) depicts a finished corkscrew. The second (20x30in) is based on a blueprint of the original design made in 1795 by Samuel Henshall, and the one on the right (60×18) is a celebration of various engineering concepts and simple machines: lever, pulley, wedge, wheel and axle etc. 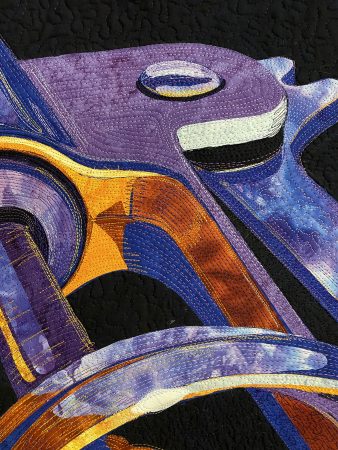 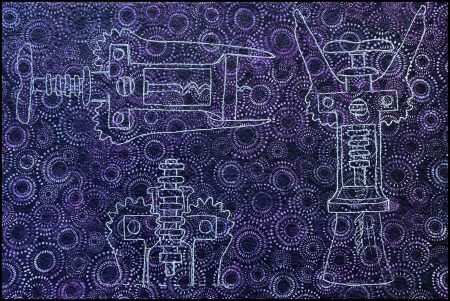 Yes, this one took a while to create but I was talking about how long it took me to update the blog! Moving on, the 2nd installment of my MACHINE series for Viewpoints:
“Bevel Gears”
60 x 30 in 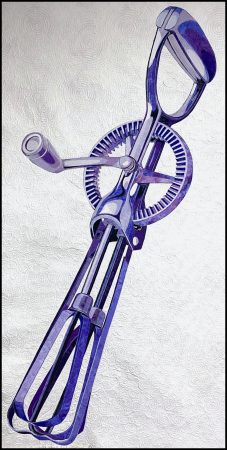 Through this series, I’m looking for objects & systems that work as designed. Like this hand mixer, it has a specific function that hasn’t changed since it was invented. There’s something comforting about that.
My ongoing theme is about machines, especially the time-tested ones. The mechanisms may be simple or complex, but their design doesn’t change much over decades or centuries. They will last for as long as the materials they’re made from last. They can endure through generations if properly maintained.

I’m not even going to go into why I haven’t posted since what, early 2019? If you live in the USA you probably know it has been shall-we-say “weird” for a few years.

So I’m just gonna jump back in and pick up here instead of where I apparently left off… I wouldn’t even know how to recap that anyway. Here’s where I am now:

As always, Viewpoints 9 has been a source of friendship and creative inspiration. The fact that there is always a challenge going on has pushed me to complete projects. Some months, those pieces were literally the only things I got done, creatively.  The latest challenge: Instead of 9 installments of 8-week challenges, we are to create 3 completed “works” within 18 months. The size requirements are: 30 x 30in, 30 x 60in and 48 x 60in. Notice the 3 works do not need to be 3 quilts. We can make multiple pieces but they have to fill those dimensions. Each of the 9 artists in our group has chosen and committed to a personal theme. Our 3 works must fit into our personal theme, and should be created to hang together as a group.

One reason I’ve chosen machines is that I love shiny objects, gears, and interesting tools. So I feel like this topic will keep me engaged with multiple pieces over 18 months. Another reason for the machinery theme is that maybe I’m looking for order and functionality in a dysfunctional world. Ingenious inventions. Systems that work. I feel overwhelmed by what I see happening in the USA. The stupid, spiteful, self-inflicted injuries. The corruption and disfunction of national institutions and elected officials. People acting out of fear and absolute ignorance. Rejection of science and reason. It’s hard to remember a time when our country pulled together to get a team of astronauts safely to the moon and back. It’s depressing and threatens to take me down into a spiral of depression and inaction.

So I need to consciously look for the antidote. Wherever I can find a little glimpse of genius. It gives me hope and reminds me that people are capable of building something useful. Maybe it’s too much to hope for my fellow Americans to band together in a common purpose. So for now, I will focus on examples of individual, tangible imagination. My favorites are the inventions that stand the test of time because they solve a problem or fill a need that is universal, not a passing trend. It’s the same fascination that led me to the mariner’s sextant. The design hasn’t changed in hundreds of years, because it is perfect in functionality and efficiency.

As it happens, that challenge began 14 months ago. So I already completed 2 of the 3 required works. Did you think I would make you read this longwinded post without so much as a colorful photo? I wouldn’t do that to you! If you’d like to read about the other artists’ chosen themes and see galleries of our work, visit Viewpoints9 here: https://www.viewpoints9.com/single-post/2019/09/01/v9-6-our-personal-viewpoints

This is the 6th installment in the Viewpoints9 “Living Planet” series. Our word assignment: IRREVERSIBLE.

You can’t un-cut a quilt. I use the holes in this quilt to represent extinct species. They leave an empty space in the ecosystem, which cannot be fixed. Other species are in danger of disappearing (represented by the black fabric shapes). Their absence causes a ripple effect, changing the lives of other animals, plants and people as well. This is the 5th installment in the Viewpoints9 “Living Planet” series. Our word assignment: GEOLOGY
​​
In viewing layers of sedimentary rock, geologists can gain knowledge about the environment at a specific point in time.
In this quilt, the layers represent significant moments in Earth’s timeline.  The layers are not shown to scale of course. Earth first cooled to solid rock over 4 billion years ago, and it existed as a barren rock for at least another billion years before water began to collect on the surface.
The first microscopic signs of life trace back a billion years ago, before the Earth even had an atmosphere.  In contrast, the entire length of human existence and all our accomplishments occurred in the last  .01% of that time – in just the last 100 thousand years or so.
From the bottom building up, the layers of fabric represent the following developments:
The bottom layer represents disparate elements that came together to form a planet.
Next – The Earth existed as molten rock
The Earth cooled into solid rock
Moisture began to condense on the surface and form bodies of water
The 1st signs of life – single celled organisms such as bacteria formed in the oceans
Plants evolved using photosynthesis (still under the oceans)
ICE AGE known as “Snowball Earth” – a mass extinction event –  ice covers the planet for millions of years
Earth begins to warm up, some ocean life that survived the ice age begins to thrive in the oceans
As the Ozone forms around Earth, an oxygen-rich atmosphere develops & supports plant life on land
Amphibians evolve from ocean creatures to ocean/land dwellers
Small reptiles and dinosaurs roam the earth
Mammals, birds, flowering plants and the first primates appear, forest dominates the planet’s surface
Homo Sapiens and Neanderthals evolve, using tools to hunt animals and create shelter for themselves
Human beings begin to form communities and develop agriculture
The invention of the wheel, breakthroughs in mathematics, vehicles, weapons, and simple machines
The Industrial Revolution changes the landscape and the atmosphere of Earth
The Nuclear Age introduces radiation to all living things on the planet’s surface
The Space Age leads to human beings leaving the Earth’s atmosphere for the first time
The Digital Age revolutionizes communication, computing, engineering and medical science
Humans develop digital communication as the newest weapon between tribes
Global climate change leads to extinctions and weather events that threaten human existence
As Earth warms up and ice caps melt, previously dormant bacteria & viruses are reanimated
The top layer represents the unknown. Maybe the Earth is covered in radioactive ash. Maybe the climate causes mass extinctions but paves the way for new species to evolve.
What is next for Earth?  Will the next eon include human beings or not? What will Earth look like to future generations of geologists?
​​
​​

This is the 4th installment in the Viewpoints9 “Living Planet” series. Our word assignment: OCEANS Rising temperatures have changed our oceans, filling them with ghosts.  Some species die off for lack of food or because of the inhospitable environment. Others leave their typical habitat in search of cooler temperatures.

Their absence alters the ecosystem.

Sometimes we notice what’s missing, like when coral dies and loses its color, or fisheries collapse and the industries that depend on them start to feel the impact. Still, we let those species go and learn to depend on others.

We tell ourselves “there are plenty more fish in the sea”.

I wonder if we’ll notice when that’s no longer true. I used the back side of the fabric to create the faded versions of fish. The ghosts are stitched into the background with free-motion quilting. Sometimes it’s all just too much.
There are so many things competing for my attention, 24 hours a day, 7 days a week. I can’t absorb it all; I can only do one thing at a time.
This quilt represents my brain, with all kinds of stuff that occurs to me throughout any given day. Interests, responsibilities, worries, data and information coming in from outside sources, etc.
​​​​
I also created some frames with different sized openings. The frames represent my attention span, or my (limited)  mental energy. They can be moved around the quilt to capture smaller compositions, similar to the way focusing on a smaller area of concern allows me to enjoy moments and be more productive with my day. I want the viewer to be able to move the frames around for themselves, to focus on different areas around the quilt. I made these from felt so they can be rolled and shipped, but I haven’t quite figured out how this will work in an exhibition.
Technical details:
MENTAL ENERGY 36×24 in
Hand-dyed and commercial fabrics, black felt, rayon and polyester thread
Machine piecing, raw edge applique with fusible web, hand guided machine stitching